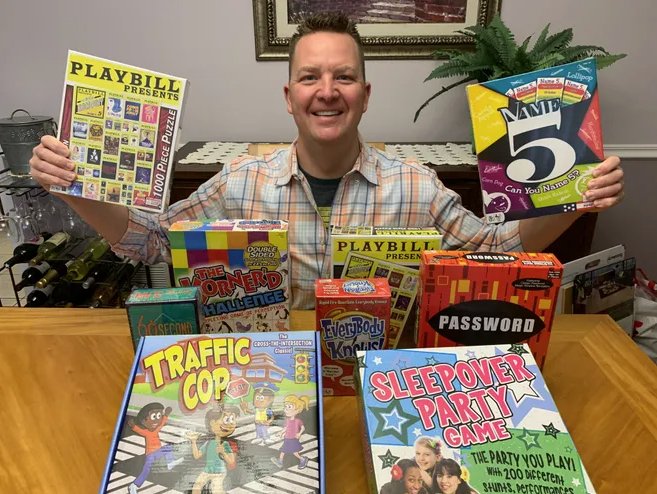 What exactly do you do in the industry?

I am the National Sales Manager for Endless games in Matawan, New Jersey. That said, we are a small company so I get to work in production, product development, marketing, and other areas outside of sales.

What is your claim to fame in the industry? Does it have anything to do with this story about you being pals with Kevin Bacon? How did you meet him?

I guess you could say my “Claim to Fame” would be that I was one of the guys who created the game The Six Degrees of Kevin Bacon. It was a fun little parlor game from the mid-nineties so I understand if you don’t know it. It was kind of a “stupid human trick” that got my college pals and I on shows like The Jon Stewart Show and Howard Stern which eventually led to a best-selling paperback and then a board game – which was our first product here at Endless Games!

So anyway, that is how I got to know Kevin Bacon; by making a game about him! We originally met on the Jon Stewart show where he was on to promote his 1995 film “Murder in the First”. We were on to demonstrate the method by which any actor in Hollywood could be connected to him. So, at first (as he has now had to discuss more than he ever thought he would have), he thought we were making fun of him. Thankfully he found this was not the case. We were just a couple of college guys who watched movies like JFK and Footloose and found that in 1994, Kevin Bacon was everywhere. As we described it in the game, he was “the center of the entertainment universe”. Whatever the case, I’m eternally grateful. Somebody with a bigger ego might have told us to go pound sand, but Kevin warmed up to the game and even wound up writing a rather hilarious prologue to that best-selling paperback (that’s now sadly out of print).

I don’t know if we’re “friends”, but he’s been cool enough to have my wife and I backstage at a Bacon Brothers concert or two. And then there’s the bizarre night where Matt Nuccio and I were backstage after Kevin’s one-man Broadway show, but you’ll have to buy us both a beer to hear that one! 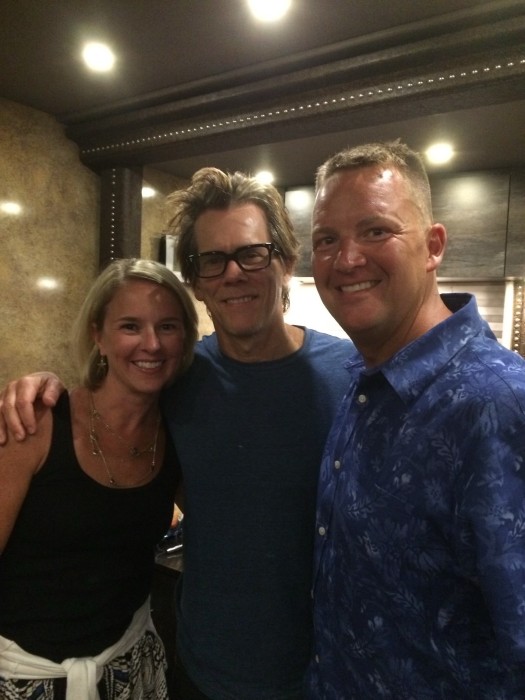 Why and how did you get into the Toy and Game industry?

We created the Six Degrees while still in college in 1994. After graduation in ’95 I never thought I’d hear about it again, but it never went away! By ’96 two industry vets who had worked on Trivial Pursuit and Pictionary were putting a new company together called Endless Games. Those two men: Mike Gasser and Kevin McNulty saw our little college drinking game as something they could build their company around and they were nice enough to let me hang around for the ride for the last 24 years!

What are you working on now?

Right now, I’m working on a great new buying and selling “light strategy” party game called Hip Town, and our “Obstacle Course in a Box” game that my kids helped to inspire.

What trends do you see in toys or games that excite or worry you?

Gosh, who’s not worried about the unending shipping woes we’ve been encountering for the past 12-15 months? Delays and price increases affect everyone, so that’s a major concern. But at the same time, I’m always excited about new and innovative products. Its always inspiring to know there are still tons of great ideas out there that don’t require batteries or other high-tech whistles and bells. Yes, I’m more of an “unplugged” kind of guy!

What advice can you give to inventors who are presenting new toy or game ideas to you?

Make sure the last item you pitch is something you are just as enthused about as your first! Its okay to have a “lead dog on the sled” so–to-speak, but try to make EVERYTHING you present a show-stopper. Just because an item is 4th or 5th on your list of what you think a given company will like, you never know what might click. Oh, and be open minded! Don’t resist slight changes or some tinkering with your concept. Its your baby and we get that, but sometimes we might think it might look cuter (or sell more units) in a different outfit.

What advice would you give a young adult graduating from high school or college today?

I think I’ll go back to my “Be Open Minded” statement from the last question. We’ve all been there, and we thought we knew A LOT more than we actually did. You will learn so much more after you graduate and leave the classroom than you think. Don’t take that old-timer who can’t use an iPhone like you can for someone who can’t teach you lessons in other areas. Talk less. Listen more. There’s lots to absorb if you are open to it.

What is the most rewarding part of your job?

When I first had kids, I thought about how rewarding it could be to know generous people in our industry who would be kind enough to “hook me up” with a free sample of something cool here and there. But while coming home from a trade show with a bag full of cool new toys will never not be rewarding, the MOST rewarding aspect has been watching my children grow alongside Endless Games.

When they were still toddlers, we had the Hooked on Phonics license so I’d get to test some games out by playing with them. When they were a little older, we did The Cupcake Race game, then The Sleepover Party. In 2018, when Endless Games created The Floor is Lava game, we put my daughters on the box! And now this year, my youngest who is now 11-years-old graces the cover of our new Obstacle Course in a Box.

I love coming to work because everywhere I turn, there’s a reminder of my kids. Some of that daddy-daughter playtime has dwindled as they’ve gotten more involved in school and sports and other activities, but it’s nice to know that I can look at 80% of the games we have in here right now and remember playing them with my daughters.

How do you recharge or take a break?

I like a nice meal, a bottle – er uh… I mean A GLASS of wine; or a couple of beers always make for a nice decompression. Traveling with my family… an adventurous vacation, or a day at the beach also always help to reset the meter. And believe it or not, I do like to be physically active. I try to follow the whole sound body/sound mind philosophy so a walk with my wife or some time in the gym are both therapeutic.

Where did you grow up and how did that influence who you are today?

I grew up in Philadelphia. We weren’t “well off” by any means, but we never wanted for anything either. Ours was a house full of love. My mom was a nurse and my dad a Philly cop, and they supported my sister and I in everything we did as kids. They supported us in everything we’ve done as adults too for that matter. It was a row-home kind of neighborhood where you played in the street and yelled “Car” whenever a motorist would interrupt the ball game. We rode our bikes everywhere and every day brought a new adventure.

I never thought about it much at the time, but my parents and my older sister and I played A LOT of games together. We’d play the classics like Monopoly and Clue, or my dad would teach us card games like “31” and even Pinochle. Whenever I’d come home from college, it was never uncommon to find my mom and dad involved in a card game together or more-often-than-not, a cut-throat game of Scrabble.

The sense of adventure and love of playing games has certainly played a huge role in my life! And for the record, my sister Kristen has been teaching kindergarten for over 25 years, so I think a lot of it rubbed off on her too!

I’m lucky to know so many of you amazing people in this business.

I’m lucky that I fell “Bass-awkward” into an industry as fun and as creative and as exciting as ours. I went to college to study marketing and wanted to make commercials, so this wasn’t really a part of the blueprint.

I’m lucky because however I got here – accidentally or not – I feel like I’m exactly where I’m supposed to be!